Most Successful Craft and Trade Fair ; 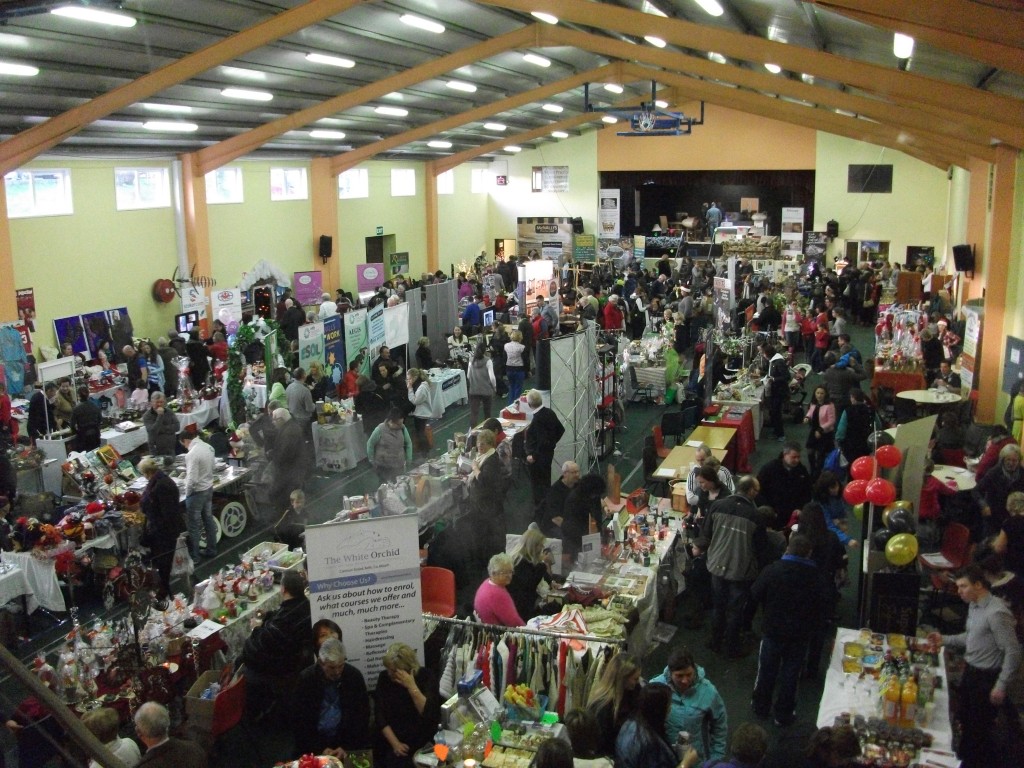 This years  Christmas Craft and Trade Fair which was held on  Saturday and Sunday last in Kingscourt Community Centre, exceeded all expectations  following on from  last year’s craft and trade fair.  There was a very large attendance  on Saturday and again on Sunday, with all parking spaces occupied at the centre many of the large attendance parked on the town main street and walked the short distance to Community Centre. The variety of stands and exhibiters  was most interesting with  exhibiters coming from all over counties  Cavan, Monaghan, Louth and Meath.   The spacious Community Centre lends it’s-self for such an event. Many of the exhibiters had been to last year’s trade fair and returned to this year’s  trade fair . . For many of the large attendance it was an eye -opener to see  what was being  produced in the region. Organised each year by Kingscourt Community Development  Association. 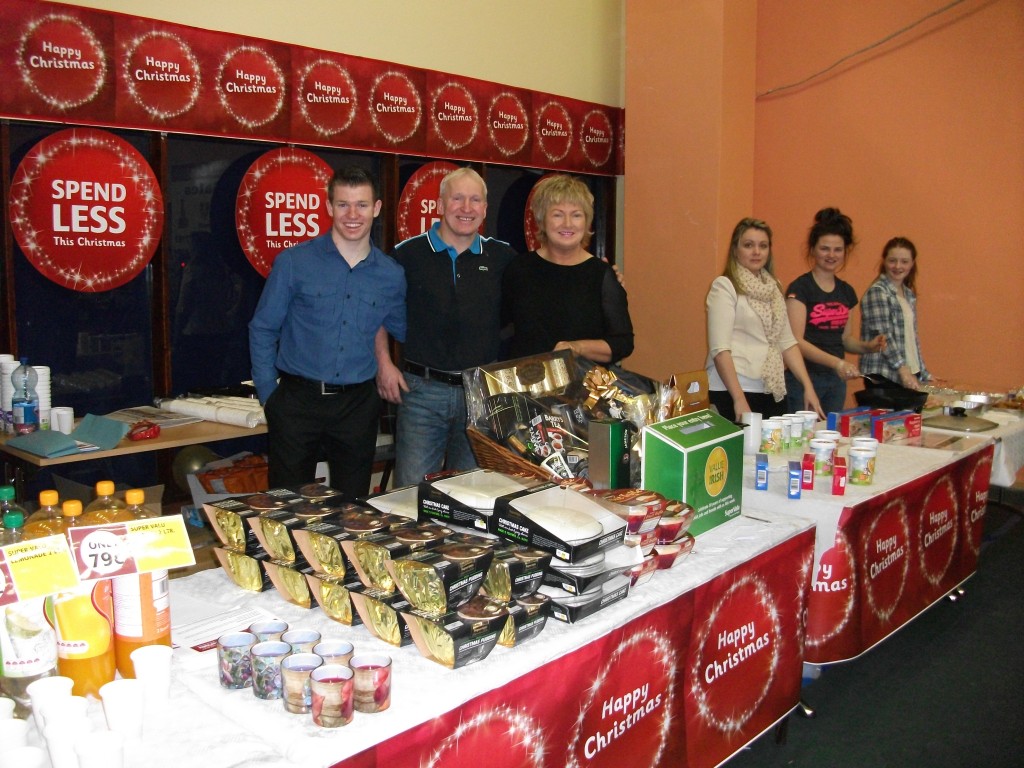 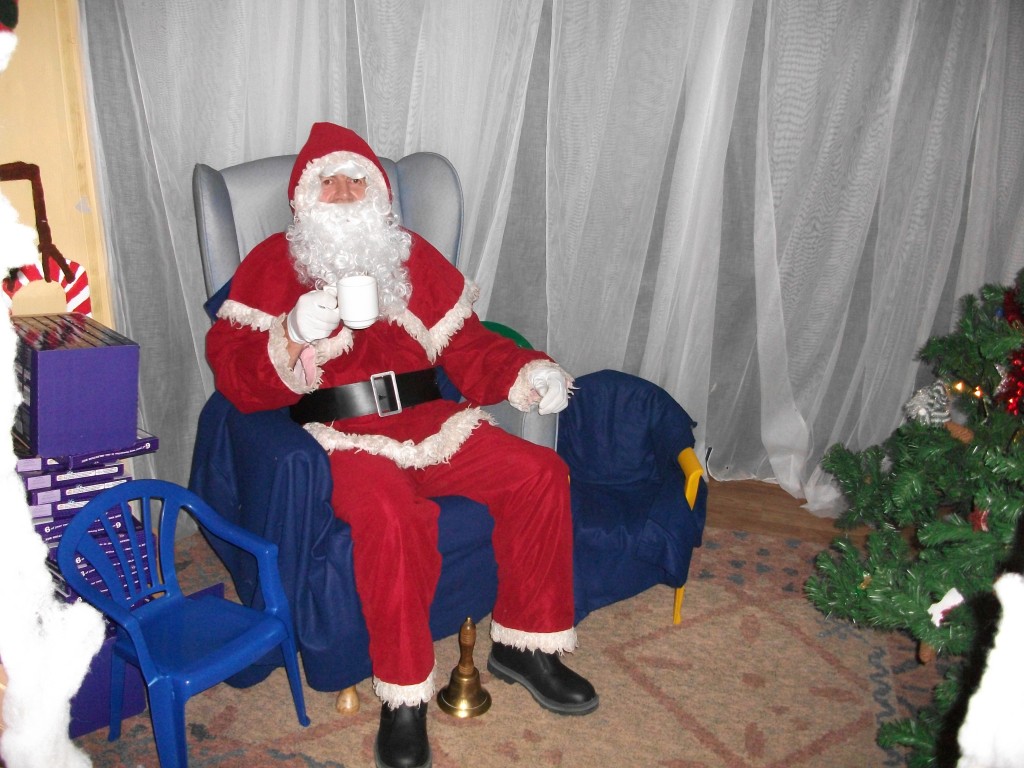 Santa Claus (having a Tea break) who was very busy meeting children, and giving them presents) 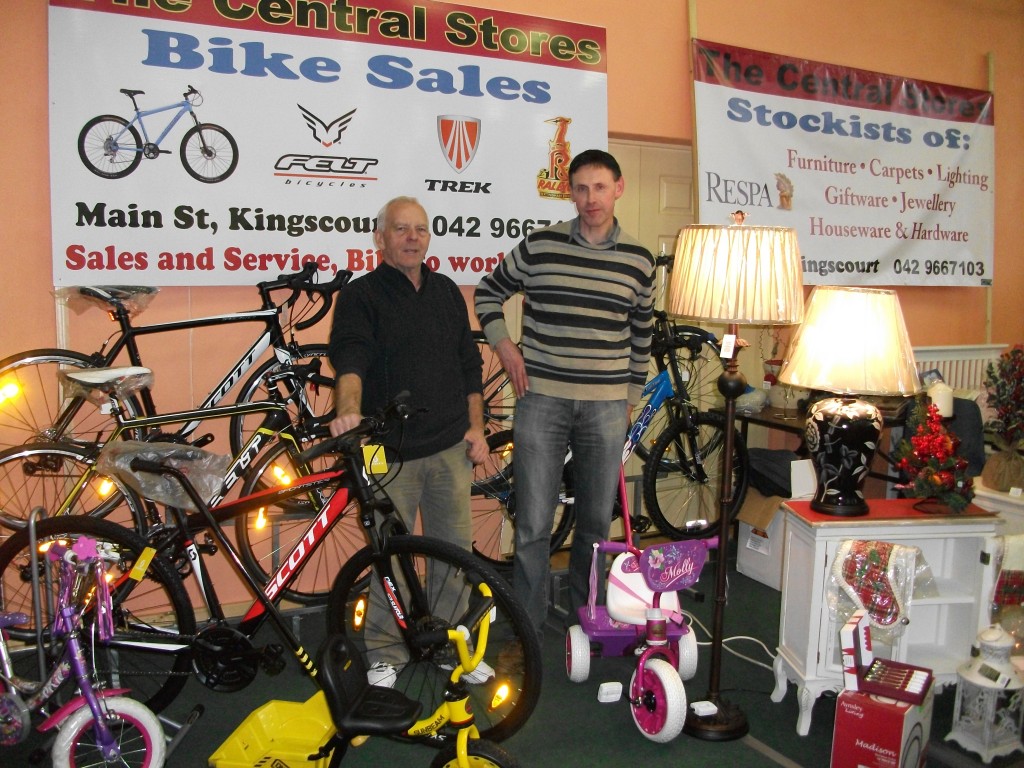 Central stores, (with Kenneth O’Reilly with a customer  on his right) 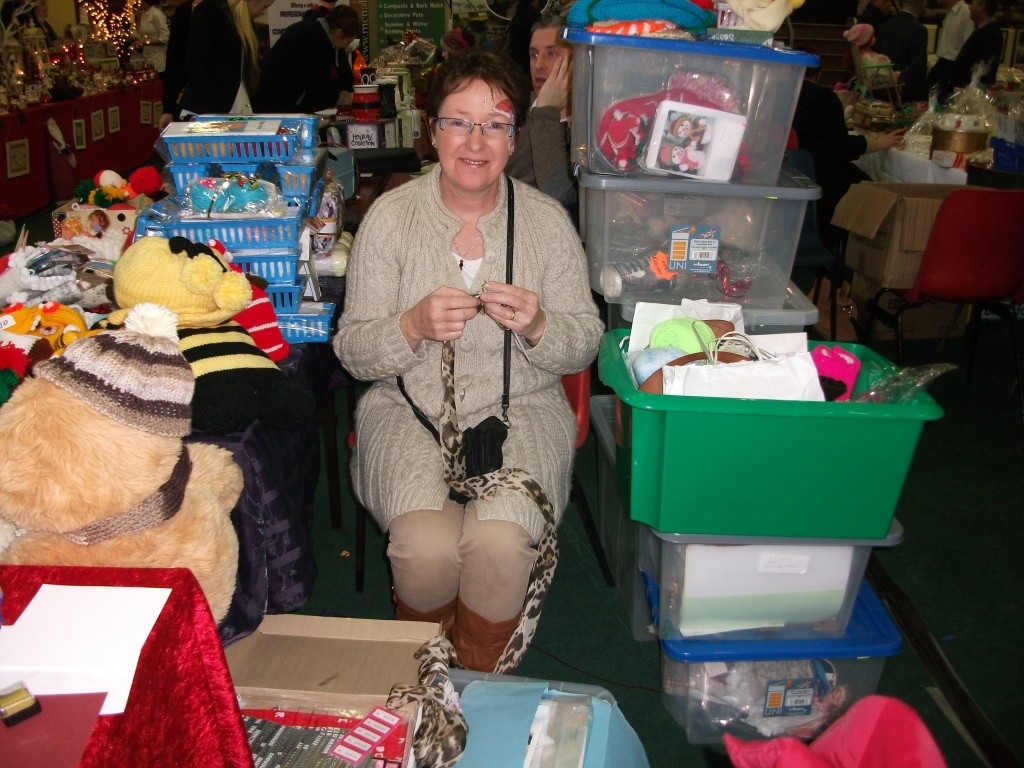 Kingscourt  Youth Reach, who attend classes in   Kingscourt Community Centre have produced a variety of  beautiful Christmas Cards (one which shows  the town’s main street after a snow storm) titled,  “Christmas greetings from Kingscourt” they would be an ideal card to send to people  from the area now living overseas  . Theyare available in local shops.

The Parish community welcomes recently baptised , Elliott  James Winder and Krystan  Polak.  All baptisms take place on Kingscourt  Church on the 2 nd. and 4 th. Saturdays of the month   at  4.00.pm

A public meeting was held on the 4 th. November in Murtagh’s lounge, Kingscourt at which a committee was formed to conduct a feasibility study, in connection with the restoration of the Grand Gardens, to its former condition as a fruit and vegetable  garden .   The gardens which were created in the 1800’s, is located in Dun-An-Ri  ,Forest Park  and was used to provide fruit and vegetables  for  Cabra Castle and also  Cabra Cottage.  the gardens comprise an area of 3.5 acres in which there was a glass house, a furnace and store there was a sundial in the garden and also a well at its centre. The gardens  was divided  up in areas with footpaths and was surrounded by high stone built walls.   Elected on to the restoration committee are, Chairperson ; Fred Leahy, Secretary is Ms. Brig Martin , Treasurer is  Michael Donoghue,  other committee  members are ; Amanda Ramsay , Johnny Gilmore, Gerry Clarke , Brendan O’Reilly, Gene Crosby  ,  and Gwen McKenna.

The Irish Blood Transfusion Service (IBTS) would like to thank all 113 Donors who attended the recently held clinic in Kingscourt Community Centre, Kingscourt. It  is essential  that we maintain and increase the level of support on our next visit to Kingscourt.

A breakdown of the total figures shows that 10 first time donors and 13 former donors attended the clinic.  A special thank you to our Local Voluntary Organiser, Mr. James O’Reilly and friends for their help and support prior and during the holding of the clinic  It’s worth noting that   a total of  1,338 units were required in Cavan General Hospital, , Cavan during 2012.  Finally  on behalf of all the patients  in hospital who benefit from your generosity, a heartfelt thank you to all who attended or helped with our Kingscourt Clinic in any way .  For further  details, please contact John Healy, Area Organiser at our Ardee Regional Office, 041 685 9994.

There was genuine regret in the area at the death  of Roisin  O’Connell (nee  Clarke)  Cornamann, Kingscourt on  Saturday 9 th. November , at St. Vincent’s   hospital Dublin.    Requiem  funeral Mass on Monday 11 th. Nov. in the Church of the Immaculate Conception, Kingscourt, with burial in the adjoining cemetery.  There was a very large  attendance at the funeral, she is survived by her husband ; Tony, son ; Jude , Patricia and grandchild, Millie. mother ; Mrs. Rose Clarke , brothers ; Andrew, Philip , Pat , Sean , Charlie , and Paul. sister;  Mairead . sisters -in-law, brother -in -law, nieces, nephews , relatives and friends to whom sympathy is extended.

Sympathy is extended  to Mrs. Mary  Gargan, Rocks Road, Kingscourt on the death of her  sister; Bernadette (Berna) Gargan (nee Droney) Newcastle, Moynalty, Co. Meath, who died peacefully at her residence on  Sunday 10 th. Nov. Requiem funeral Mass on  Tuesday 12 th. Nov. in  St. Mary’s Church, Newcastle with burial in Moynalty cemetery.  Formerly of  rocks Road, Kingscourt, she was a former employee of  Gypsum Industries, Office staff for many years .

The death occurred on  Monday of last week of Mr. Peter Rogers, Carrickleck  Rd. Kingscourt ( late of The Beaver Dam Bar, Bailieboro)  Peacefully  at  Castleross  Nursing Home, Carrickmacross.   Requiem funeral Mass on Thursday of last week in the Church of the Immaculate Conception, Kingscourt, with burial in the adjoining cemetery. He lived in  Canada for some time and is survived by his   wife ; Anna, daughters ; Delia (Kingscourt) Loretta (Canada), grandchildren ; Ian, Emmet, Rory, Katie and Maura,  Sons-in-law ; Jim and Paul, brother and sister, relatives and friends to whom sympathy is extended