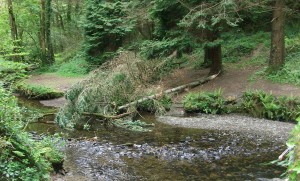 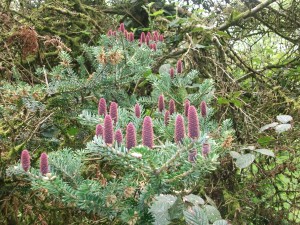 Pine  Cones, this photo which was taken recently in Dun-na-Ri, Forest Park , shows a  specimen Pine tree, which is a native of  Korea, and has its pine cones  upright, not like native pine trees which have their pine cones pointing down, it is one of many specimen trees and shrubs which are planted in the forest park. Paddling pool, (photo)  Shows , a large tree which was knocked by a wind storm last January  now blocking most of the children’s paddling pool in  the forest park, which needs to be removed.

Kingscourt   Alzheimer’s  would like to thank sincerely  every- one who helped  and supported  their recently held “Tea Day” , in  SuperValu, at  Bingo and a special thanks to Sadie O’Reilly who opened her home for tea.  All proceeds  are spent in  Cavan .

Congratulations to Ms. Cheryl Williams and Mr. Shane Hurst, Mr. Robert Russell and Ms. Denise Mary Galvin, on their recent marriages.  Couples intending marriage in the Diocese of Meath, must complete an ACCORD pre marriage workshop.

The annual  Exam Mass for the pupils and their parents and families will be held  takes place at 12 Noon next weekend, , all welcome to attend.

The death occurred  suddenly on Friday 2 nd. May of Michael Kennedy, Drumiller, Kingscourt. A member of the farming community he was predeceased by his  wife Bridie.  Removal on Monday 5 th. May to the  Church of the Immaculate Conception Kingscourt. Requiem funeral Mass on  Tuesday 6 th. May  in the Church of the Immaculate Conception, with burial in the adjoining cemetery.  He is survived by his daughter  ;Maura ,son-in-law; Martin , Grandchildren,  neighbours, relatives and friends to whom sympathy is extended.

The death occurred  peacefully on Sunday 4 th. May in Beaumont Hospital, Dublin  of Gerard Mackin, Julianstown and formerly of Kingscourt. Beloved husband of Marie and father of Karen. Deeply regretted by his loving family and his brother, Rev. Fr. Patrick  A. Mackin P.E. Bohermeen, sister ; Emma  (McAvoy), son-in-law Brian, , sisters -in-law, brother-in-law,  nephews ,nieces, relatives and friends to whom sympathy is extended . Removal on Tuesday of last week to St. Mary’s Church, Julianstown, with Requiem funeral Mass on  Wednesday  of last week, with burial in Moorechurch  cemetery.  The deceased who was in his mid-eighties , in his early years, he was actively  involved with family members  in the running of Mackins Hotel,Kingscourt,  Mackins grocery and hardware shop, he was also a projectionist , at times in the family owned, Majestic Cinema ,(now  SuperValu) and  also funeral undertaker .

There was genuine regret and sadness in the area  at the death  of Brigid  Gargan (nee Carolan ) Mount St. Joseph, Kingscourt on Thursday 8 th. May ,peacefully at Drumbear Nursing Home Monaghan  Deeply regretted  by her loving son ; Jimmy, daughters ; Mary, Veronica and Breda, sister-in-law Mona, sons-in-law, Pat Joe and George, daughter- in- law , Dawn,  grandchildren ; Ian, Alan ,Owen ,Brione ,Aoife ,Aine ,Vincent , Mona, James .  great-grandchildren ; Calvin , Brion , Serena , Caitlin ,Cian , Lila and Fio. nephews , Nieces and many friends.  Removal from her residence on Saturday evening to the Church of the Immaculate Conception , Kingscourt.  Requiem funeral Mass on Sunday 11 th. May with burial in the adjoining cemetery.  The deceased  who was in her 99 th. year  was devoted to her family, lived a simple and ordinary life,  a religious person attending daily mass whilst she was able .  An avid  Bingo fan attending local and nearby Bingo halls, Worked for many years in the Office canteen in Gypsum industries, where she enjoyed the banter whither it was about sport or politics. There was a large and representative attendance at the removal and funeral which was indicative of the high esteem in which she was held in the community .

First Communion on Saturday next 17 th. May at 10.30.am for Muff N.S. in the Church of Our Lady of Mount Carmel